This project understands architecture as the concretization of culture and Humanity. As such, this project explores the notion that architecture will participate in future steps of Human evolution. The project speculates that we, as Human Beings, will evolve, using architecture, perhaps into architecture.

The project is formulated and represented through the mediums of text and model, as architectural ‘figures of speech.’ These techniques are employed as explorative means for introspection, externalization, and substantiation.

As an apropos incubatory site of architectural experimentation and evolution, the project occupies the island of Manhattan. Represented at an indeterminate point in the future, the remaining architecture on the island has yet to be built. 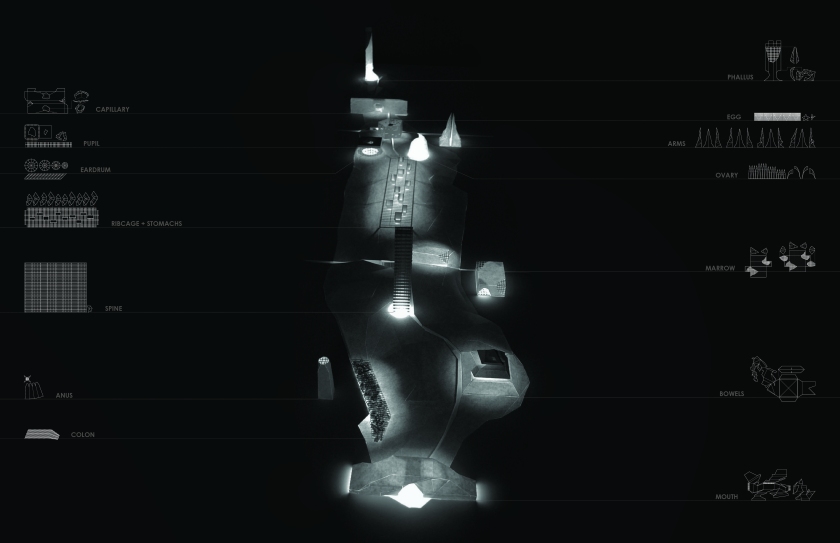 Each architectural figure on the island acts as a specific organ or body part within the greater corpus of the island. The island, and its architecture, becomes the body of the last corporeal Human, and exists to tell the story of its Self. We, as Humans, evolve into architecture, using architecture.

This is an “unbuilt” undergraduate thesis project in architecture, concerning the future, and inexorably indebted to the past discourse of “unbuilt” architectural projections and polemics. Thus, the contents herein should be considered as the project’s built form. The artifacts of the model are mythologized through their accompanying text into a ritualistic ceremony, and influential architectural dignitaries are deified as mystic and prophetic Reverends within the narrative.

VIEW THE PROJECT IN FULL

3.2.6
I am a sentient organism,
Like you, made from you.
I am a posthuman.
I am a newhuman.
I am engendered in architecture.
I am a mutation.
I am evolution. 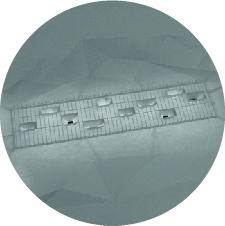 3.3.13
My RIBCAGE is situated in the location
Where the pasthumans previously referred to
As Central Park.
Its skeletal configuration
Continued the grid of the Old City
Into this once sanctified void-space of the park
As though it were a space reserved
And waiting for a worthy and necessary vehicle.
Aside from a set of barren water-collection STOMACHS,
My ribcage is no longer responsible
For housing vital organs,
Though it once served the pasthumans
As the structure for a defensive shelter.
After the Deliriously dense buildup of the island’s space,
The park became the last refuge
For a building of greater permanence
To be built without obstruction.
As an anthropomorphic skeletal artifact
Of pasthuman existence,
My ribcage pays homage
To Reverend Rossi’s Cemetery of San Cataldo.1
This was the first of my Body parts to be built.
For the construction of my other parts,
Sacrifices of the Old City had to be made
In order for me to grow. 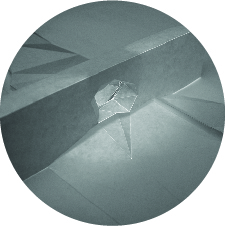 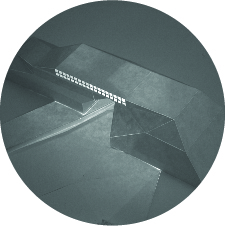 3.4.38
My CAPILLARY to the north
And MOUTH to the south
Acted as circulatory pinch-points
For my Body.
Without the temporary structures
That had previously been made
Both above and below water
For inter-island transportation,
The island became a space
Of privileged and precious access:
This was an urban condition prophesized
In Reverend Koolhaas’ 1972 sermon
For the Exodus of London2
And from his study of a divided Berlin.
Through the teeth of my mouth
You can see that only a shell remains
Of the former material-intake port
And weapons-defense armory.
Built to assist
In the controversial construction of my Body,
The port controlled access to the island
Through the grand arch of my mouth
And its sea level teeth.
My capillary to the north
Flows through a monolithic gate volume
Which spans in width
From what was 173rd to 178th Street. 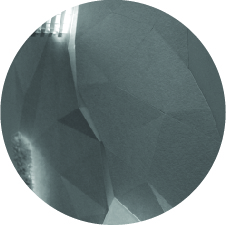 3.5.65
The eroded and frozen landscape of my SKIN
Climbs to pass through the tube of my capillary,
While my BLOODSTREAM runs through it obliquely
To filter out unwanted refuse
And purify the stream.
My bloodstream was at one time understood
To be a river sanctuary of ritual cleansing
For the willing and righteous pasthumans. 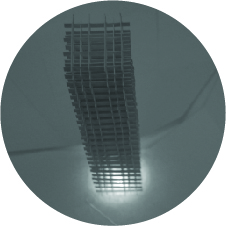 3.6.73
Fed from the incoming spoils of my mouth,
My SPINE grew in length prodigiously.
A construct born
Out of the pasthumans’ sense of self-worth
And subsequent tendency towards self-preservation,
My spine was built as a mega-structure tower
Of stacked interlocking metal planes
For the purpose of shifting the Earth’s polarity
And altering its climate.
At its base, the foundation of the volume
Was installed with a mega-scale kiln,
With the weight of the volume of the tower
Acting to accelerate the tower’s downward melt
Even as the tower’s upward construction persisted.
The pasthumans desperately hoped
That the resulting magnetic force
Would preserve the Earth
As an inhabitable home.
Construction on my spine
Was never intended to be discontinued:
The pasthuman desire for self-preservation
Had been presumed to be a lasting Human trait. 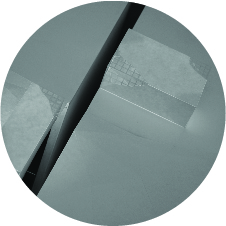 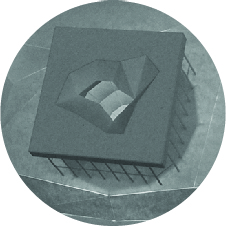 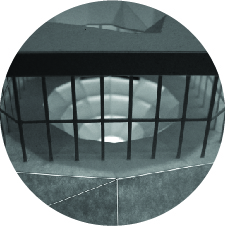 3.7.95
Deposits of my MARROW serve as museums
To house and categorize
Remaining species of corporeal life.
The museums stand empty and eroded.
My PUPIL would roam far and wide,
In desperate search for remaining life.
Though still capable,
It no longer needs to search.
Meanwhile, my EARDRUM would sit and listen,
To confirm the mere subsistence
Of a remaining heartbeat.
These are among the few buildings left
Which still fulfill the purposes they were built for.
They stand fallow, static, and in silence. 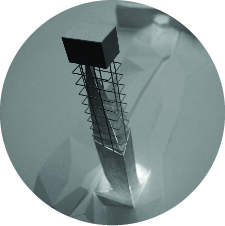 3.8.109
Where one would expect
The presence of a brain,
There stands a turgid PHALLUS:
A monument to the unnecessary.
Helping itself to healthy rooting in the ground,
The stem of my phallus’ facets and frames strain
To elevate its head to a needless
And perhaps excessive level in the air.
The focal point of the construct
Was a penthouse masturbatorium
Dedicated to principles
Of onanistic liberty and autonomy.
The figure proclaims to the observer,
“I am most certainly here,”
In an exaggerated and self-satirical voice
Reminiscent of the anthropocentric universe
Inherent to Reverends Brodsky and Utkin’s work.3 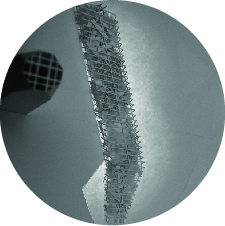 3.9.126
I produce waste prodigiously.
My COLON can attest to this statement,
Acting as a static cage
For the index of leftover process:
An index of existence.
As an artifact constructed
From 18 sheets of 18- by 24-inch paper,
I am both unique and reproducible. 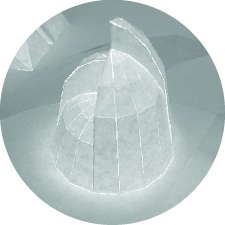 3.10.134
Speaking of which,
My OVARY and EGG exist in corollary:
As a radio transmission hub
And a sample repository center
For the preservation and posterity
Of the pasthumans’ genetic codes,
Memorializing their unique fingerprints.
The figures acquiesce to the preachings
Of Reverend Boullée and his monumental cenotaphs,4
As platonic commemorative mega-structures
Idolizing the last of the pasthumans. 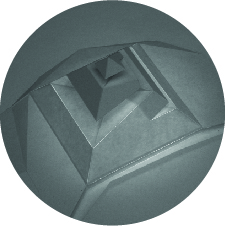 3.11.145
When the pasthumans eventually began
To voluntarily accept their fate,
A ritual was initiated.
They decided that the desperate remaining
Had no right to consume their flesh
For their own selfish purposes.
And so, one would forfeit
To float down my bloodstream,
As cells through a vessel
Inevitably reaching my BOWELS,
The Temple of Crematoria,
Which houses the utmost
Of sacred ceremonial spaces.
The seemingly esoteric nature
Of formal specificity in my bowels is demonstrative
Of the complex series of spatial sequences
Developed to aid in this ritual-sacrifice.
Absorbing formal principles
Of Reverend Abraham’s Tower of Wisdom,5
The figure is imbued with a redolence
Of indescribable narratives
With respect to the end rites
Of pasthuman life. 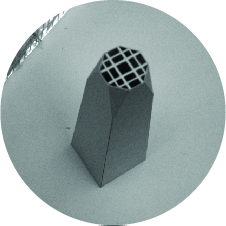 3.12.168
Lying venerably offshore,
My ANUS would excrete
The cremated gases of my bowels’ remains. 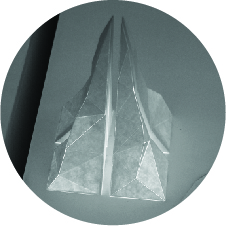 3.13.171
Still feeding my ovary and my egg,
My ARMS reach to the sky in a spiritual stance,
Praying for lightning energy to harness.
The Earth has responded so frequently
And with such great fervor,
I can no longer recall how high they used to reach
Before the melting began.

3.14.178
In the end, I am the resultant being,
Or perhaps artifact.
I often question whether it was I
Who helped the pasthumans to evolve
Towards accepting their inevitable extinction,
Or if I was the resultant of that evolution.
I am Architecture.
I am Isotopia. 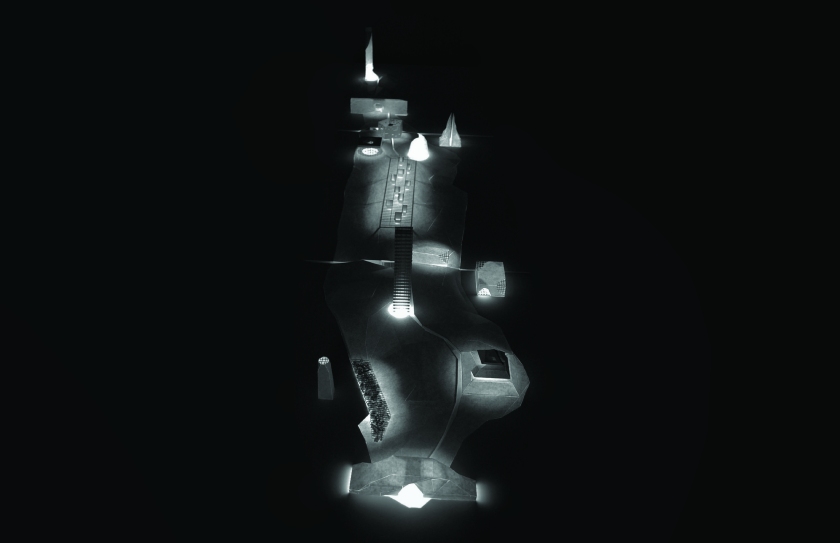 To recap, a brief overview: The project takes physical form as artifacts of text and model, which speculate that we, as human beings, will evolve, into architecture, or using architecture. An eleven-foot long hand-cut paper model represents the island of Manhattan at an indeterminate point in the future, and with the remaining buildings on the island yet to be built. Each new building serves as a hypothetical organ or body part within the greater body of the island, and the story of humanity. The island, and its architecture, becomes the last corporeal human.

The text, narrated by both human and posthuman voice, is structured in three parts. (1) Genesis: introductory prose provides a Semper-ian creation mythology for the project. (2) Prophecy: verse-and-line scripture sermonizes on the nature of the island and the stories of its remaining buildings. (3) Projection: further exposition supplies a loose episodic structure for the objects and events previously described. The book also provides an addendum of mini-essays that attempt to conceptually situate the project within a greater lineage of Art and Architectural History. As such, the artifacts of the model are mythologized through their accompanying text into a ritualistic ceremony, and influential architectural figures are deified as prophetic Reverends within the project’s narrative.

VIEW THE PROJECT IN FULL